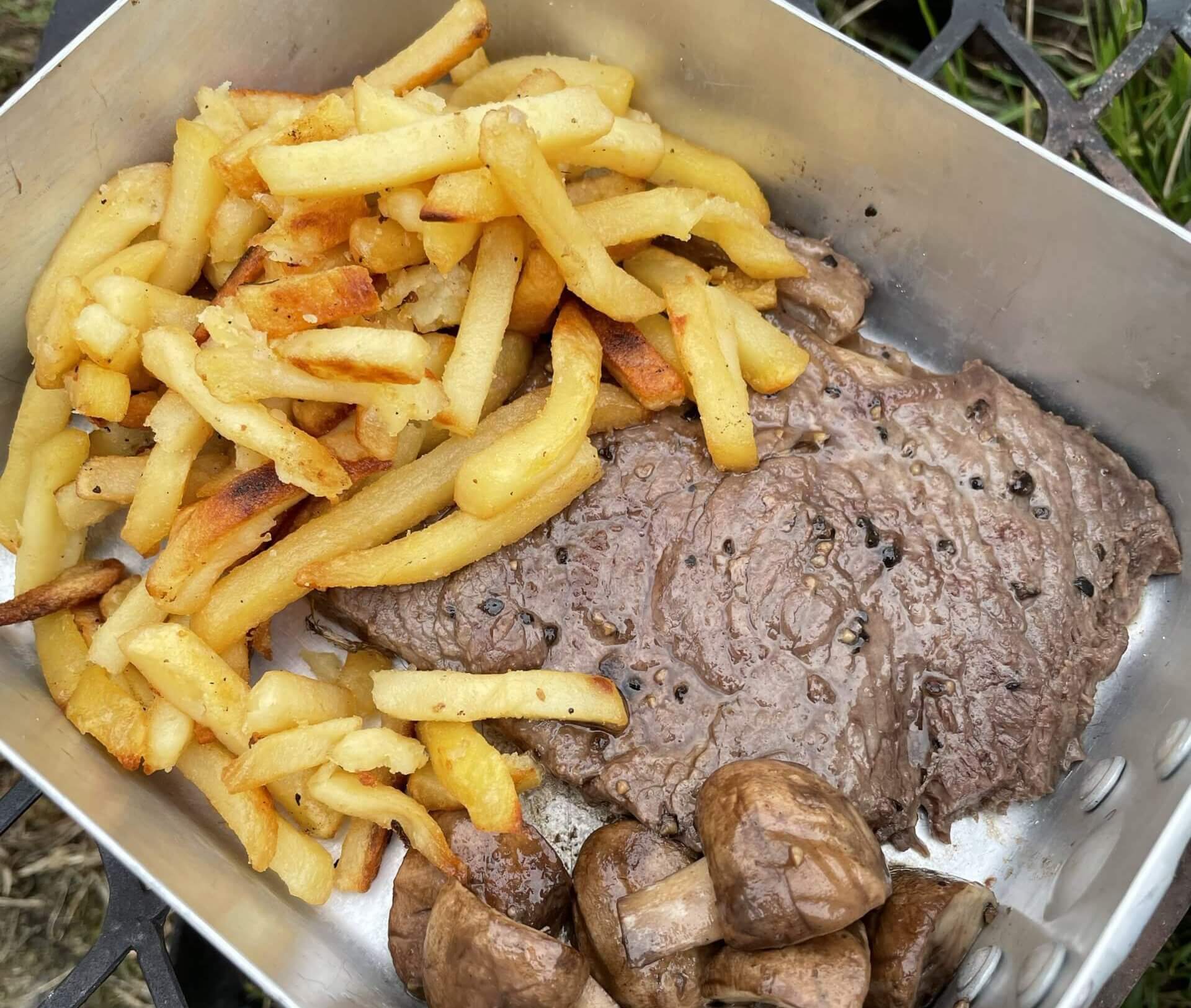 I’ve been camping since I was 12 and in all that time I have never cooked chips or French fries whilst camping. Today that changed!

I happened to have a Dutch Oven with me and whilst contemplating what to have with a nice ribeye steak and mushrooms, I decided to pick up a pack of pre-prepared frozen French Fries from a Co-Op in Glencoe.

This was more out of curiosity than any great culinary idea, however, it does serve a purpose. Quite often I end up cooking camp food for kids and they screw their little noses up at another pasta or couscous or rice based meal. All they sometimes want is a campfire pizza or chicken nuggets & chips. The sort of food that children quite often eat at home.

With that in mind, this isn’t really a recipe, as such. It is more a camp cooking technique where a Dutch Oven is used as, erm, a conventional oven. With a campfire and a Dutch Oven you can cook pies, chips, potato wedges or waffles, pizza, chicken nuggets, fish fingers… Basically everything a 5 year old loves!

Camp Cooking with a Dutch Oven

A Dutch Oven is a cast iron cooking pot that you put in, on or over a campfire. The technique to using one is rather simple, get it hot and it retains heat for quite some time. Long enough to effectively oven cook food outdoors.

Dutch Oven cooking times are practically the same as a fan oven at home. They aren’t the easiest of things to carry around but I often lug my 4.5 litre one on camping trips. I wouldn’t take it hillwalking or backpacking but it’s a useful tool in my camp kitchen arsenal.

A lot of campsites won’t allow campfires but if you happen to be at a beach or Loch then a fire-pit or campfire becomes an option. I’ve never tried a Dutch Oven over a barbecue but it should be possible.

Again, this isn’t a recipe as such but more a general guide to cooking with a Dutch Oven.

Dutch ovens can be placed directly in the fire, hung from a tripod or positioned on a grill.  Use whatever option you prefer. If using a tripod, you can control the heat by moving the Dutch Oven up or down.
Keyword camp cooking families, camp cooking for kids, dutch oven recipes
Categories: Camping Recipes, Dutch Oven Recipes
Recent Posts
Latest Products
Categories
We use cookies to ensure that we give you the best experience on our website, these cookies do not store any personal data of yours.Ok